DESCRIPTION: The Axolotl (pronounced axo-LO-tuhl) is a neotenic salamander, meaning they retain certain larval characteristics in the adult, reproductive state. They possess feathery external gills and finned tails for swimming. Wild axolotls are dark-colored and can shift their hue a few shades lighter or darker as needed for camouflage! Pink and light-colored animals are bred in human care as pets for their “pleasing” shades.

They have feathery looking branches on either side of their head that are actually gills but they also have fully functional lungs and sometimes go to the surface for a gulp of air.

They can be between 6 and 18 inches long and weigh between 2 and 8 ounces. Axolotls have a broad, flat body with a large head donning its signature feathery gills. Its mouth is often bent into a slight grin. Round, dark eyes with yellow, iridescent irises help the axolotl to see in murky environments. It has lizard-like limbs that carry it along the lake bottom.

They can regenerate their limbs, lungs, heart, jaws, spines, and even parts of their brain! Scientists have found that axolotls can regrow a new limb five times perfectly, in a few weeks—without even a scar. Every tissue is replaced: skin, bone, cartilage, muscle, and stem cells. Other organs can regenerate countless times and be completely functional. Axolotls are important in medical and scientific research because of their unique regenerative qualities as well as their neotenic characteristics.

It is said that this animal is over 1,000 times more resistant to cancer than mammals.

RANGE/HABITIAT: The axolotl is only native to Lake Xochimilco and Lake Chalco in central Mexico. Unfortunately for the axolotl, Lake Chalco no longer exists as it was drained by humans to avoid periodic flooding, and Lake Xochimilco remains a diminished glimpse of its former self, existing mainly as canals.

DIET: Carnivores – they eat mainly worms, tadpoles, insects, small fish and zooplankton. They do not chew their food; rather they use suction to capture a meal. Since they are bottom feeders they often suck up gravel with their food, which helps in the grinding up of food and in the regulation of buoyancy.

​FAMILY LIFE: Other than during breeding season Axolotls are solitary creatures. After mating, the female will lay between 300 and 1,000 eggs in the water. Each egg is individually laid and is attached to a protective substrate like plants or rocks to protect them from predators. The eggs will hatch in about two weeks and the young Axolotl are independent from the moment they emerge from their eggs.

LIFE SPAN:  The average lifespan is between 10 and 15 years but they are known to live longer in human care than in the wild. 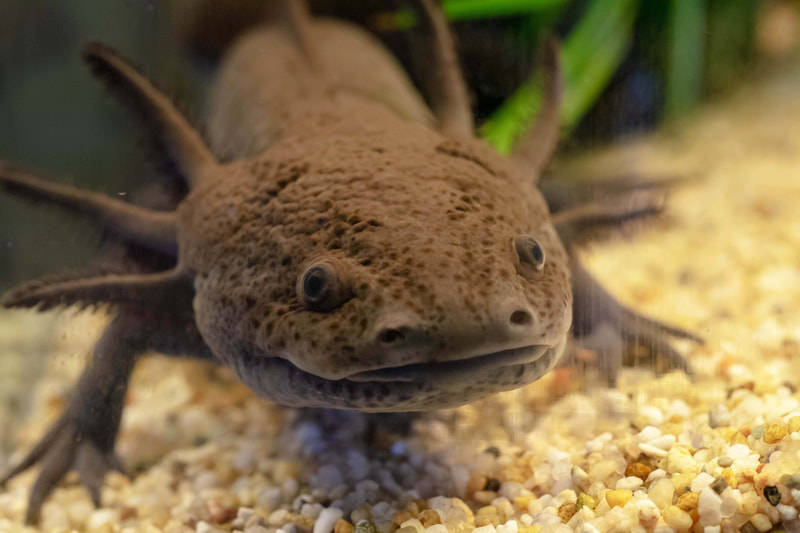