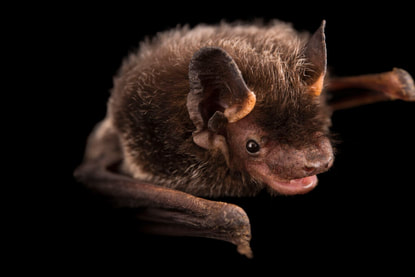 Physical Description:  A larger bat species, the Big Brown Bat weighs between ½ and ¾ ounces (14-21 grams) with a wingspan between 13 and 16 inches. Their long oily fur ranges from tan to dark brown, while their nose, wings, and muzzle are all black. The Big Brown Bat


Habitat: Big Brown Bats live in diverse habitats, ranging up to 3,100 meters above sea level, and across forests, caves, cliffs, and assorted sub-terranean habitats. They can be found in nearly every American habitat, though deciduous forests are where they are found in highest abundance. Big Brown Bats are often found roosting under the bark of Oak and Beech trees, as well as Pine and Bald Cypress.

Range: They range from the extremes of Northern Canada through the United States of America, Central America, the Caribbean Islands, and parts of Northern Colombia and Venezuela.

Diet: Insectivores, Big Brown Bats primarily prey on beetles, however flying insects are also a popular prey item. This includes moths, mosquitos, wasps, lacewings, and dragonflies.  Females can consume their weight equivalent in a night during the reproductive season.

Life Span: They can live up to 20 years in the wild, however most die within their first winter.

Social Structure: Female Big Brown bats will roost in colonies ranging upwards to 700 individuals to rear young, with males joining the females in the colonies during the late summer. Males typically live alone or in small male colonies outside of this period.