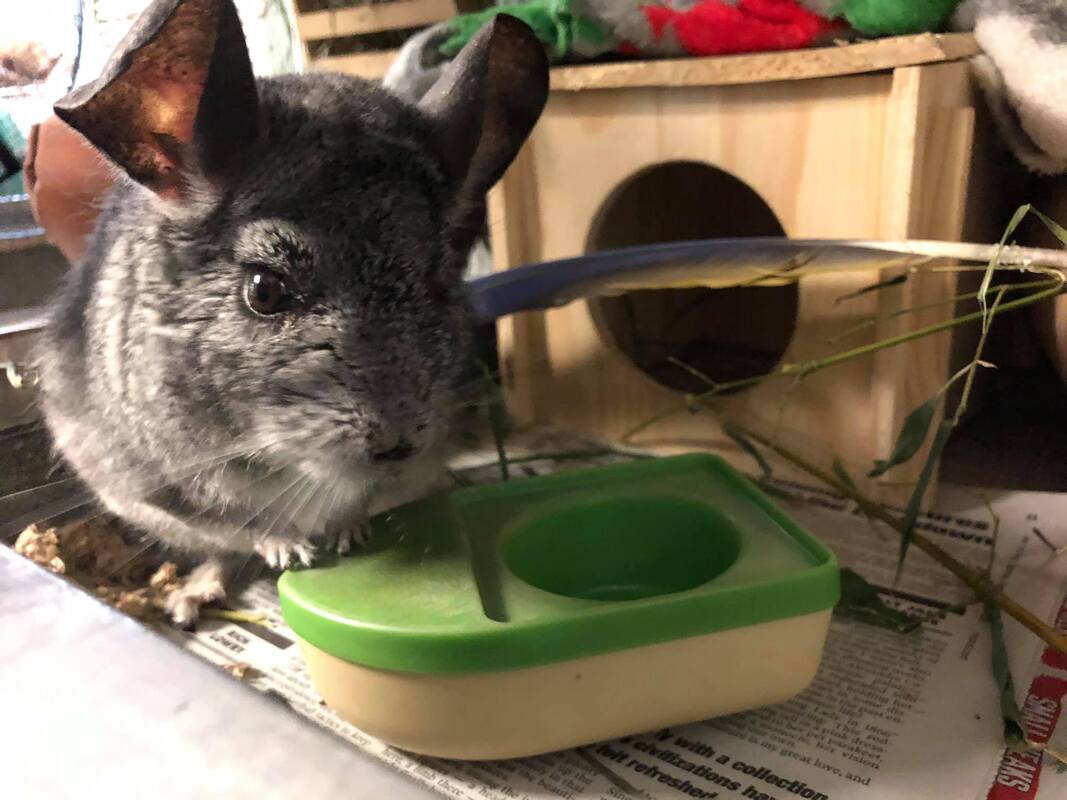 DESCRIPTION: The long-tailed chinchilla is a medium-sized rodent with famously thick, beautiful fur. It is a social, matriarchal animal native to the Andes mountain range.

They are crepuscular, meaning they are active during dusk and dawn.

Their fur is usually pearl, bluish or brownish gray except on their abdomens where the fur is yellowish-white. Their coat is very soft and dense. Each hair usually has a black tip, and it is so dense as many as 60 hairs grow out of one follicle. Chinchillas have one of the densest fur coats of any known land mammal.
Chinchillas do not bathe in water, but they enjoy a good dust bath. Rolling and flipping around in dust keeps them clean and healthy. They do not bathe in water because their fur is so dense they could get fungus. An interesting thing about Chinchillas is that they do not sweat; they expel heat through their ears and feet.

The head is broad, and the external ears are large. Chinchillas have large, black eyes with a vertical split pupil, vestigial cheek pouches, and incisors that are dark orange.

Chinchillas are 9 to 14 inches long with a 3 to 6-inch bushy tail. Females weigh up to 1.76 pounds while males only weigh about 1 pound.

Both the fore foot and hind foot have four digits with stiff bristles surrounding the weak claws. The soles of their feet are not furry. They have fleshy foot pads called pallipes. Their fore feet have four easily maneuverable toes, which they use for grasping.
Their well-developed hind limbs are longer than their forelimbs. Members of this family often jump bipedally, but mostly they move on all four limbs. While eating, they sit erect and hold the food in their forepaws.

RANGE: They are native to the Andes Mountains of northern Chile in South America.

DIET: Chinchillas are mostly herbivores. They eat a wide variety of vegetable matter including seeds, grass, leaves, roots, lichen and mosses, as well as insects and eggs when they can get them.

FAMILY LIFE: Chinchillas are social animals and have been known to live in colonies of more than 100 individuals. They den in crevices and holes among the rocks.

​Chinchillas are basically monogamous; Females normally have two litters per year, with two to four young per litter called kits. Gestation lasts for 111 days, and the kits are well developed at birth.

The newborn Chinchillas weigh a little over an ounce, are fully furred, and have their eyes open.

The kits are weaned within 6 and 8 weeks.

LIFE SPAN: Average life span is 10 years in the wild and up to 20 years in human care.